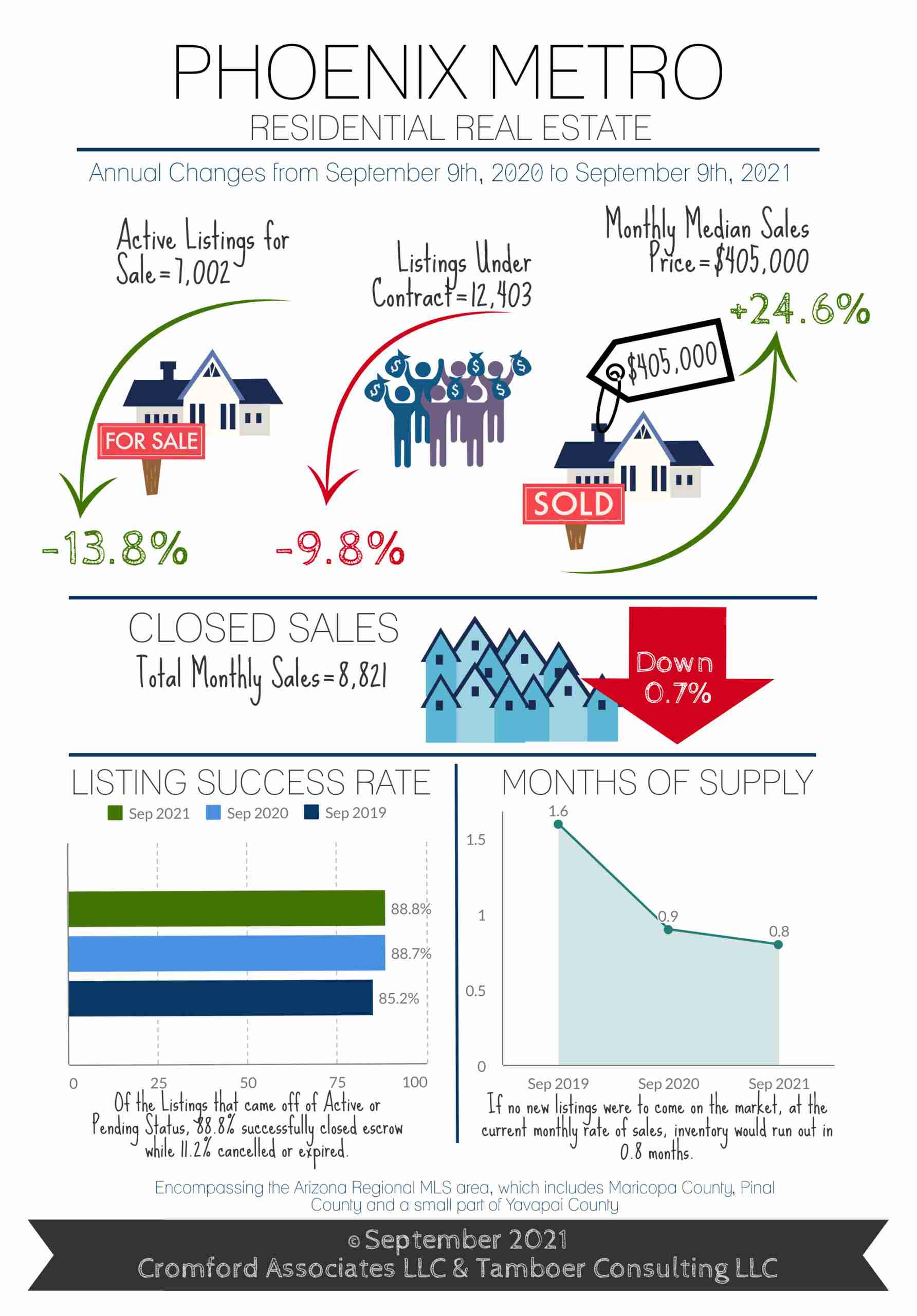 For Buyers:
Buyer demand has rallied sharply over the past 4 weeks, which is unusual for this time of year.  The rally is exclusively between $400K-$800K, spiking nearly 20% in contract activity since the end of July.  We have to wait until the transactions close and record to identify the buyers, but judging from July’s closing analysis we expect to find a surge in iBuyer purchases (aka “Internet Buyers”). The most notable iBuyers active in Greater Phoenix are OpenDoor, OfferPad, Zillow, and now RedFin. At least one of these organizations has increased their approved acquisition price to a $750,000 limit, which could explain the sudden spike in sales. iBuyers do not buy and hold property, they primarily engage in a short-term flip strategy and their activity does not constitute true demand. True demand is someone who will live in the home or rent it to someone who will live in the home. Flip investors are strictly the middlemen between the seller and the final buyer, which adds one extra closing to the books and makes true demand appear larger than reality by increasing the total number of sales without increasing the level of supply. The existence of institutional flip investors in the marketplace can be frustrating for buyers from a competition standpoint, but in the end these buyers still need to re-sell the home to someone. As prices have reached levels beyond the affordability threshold for a larger percentage of residents, the question is whether or not iBuyers will be able to flip their acquisitions with the same profit margins going forward. Permits for new homes are up 32% for January through July this year and are at their highest since 2006.  Considering the average build time for a new home is anywhere from 10-14 months due to supply chain disruptions, iBuyers and sellers in general may be seeing more competition from new construction starting in the 4th quarter 2021 and into early 2022.

For Sellers:
While the $400K-$800K market is seeing elevated activity, the luxury market over $1M is a different story. Make no mistake, the luxury market is still extremely hot but it’s not because buyer activity is rising. Listings in escrow over $1M have dropped 17% since June, but that’s normal for this time of year in this segment. The reason the luxury market is still hot is due to a simultaneous drop in competing supply.  It’s more prominent over $1.5M where supply has dropped 10%, also since June. So if contract activity isn’t rising, then why is supply over $1M dropping?  It’s seasonal.  Every year from May to July there’s an elevated number of cancelled and expired listings in this price point, which reduces the number of active listings. This year was no different.  Additionally, the number of new listings added monthly to supply dropped 26% between April and August, which meant there were fewer new listings to replenish those that cancelled or expired.  The result is a luxury supply count 31% lower than this time last year. This is good news for the sellers who remained active over the summer.  Even though luxury demand came down, it’s still 21% higher than it was last September with fewer competitors. If the market follows its seasonal tendencies there will be a rally of new listings coming to the party in October, possibly giving buyers more choice in the 4th quarter.